During the week preceding the 13th March 2022 insiders program, Simon Birmingham had appeared on the ABC and been questioned about defence. He stated that Labor’s defence spending when they were last in government was the lowest in terms of GDP since 1939.

I had heard this before when Tony Abbott stood in front of the helicopter landing docks at Williamstown in Melbourne and said the same thing. He also criticized the ALP for their defence spending.

This article I wrote at the time (2012) is really well worth reading.
The insiders program of 13th March 2022 featured the then Shadow defence spokesman Brendan O’Connor.
Here is a link to that whole program.

The interview starts at 19.05 mins into the program.
Most of the discussion is about using defence for Natural disasters.
At 28.39 Speers questions Labor’s record in defence.
He said. “Labor likes to talk about the average defence spend in it’s 6 years in office, but it did fall considerably in the last two years in office. Compared to where it began down to 1.5-6 % of GDP. The number of troops fell as well, we can see it here in fact (shows graph), drawn from the defence annual report, you can see troop numbers, fell in your last two years in office as well, do you acknowledge Labor cut defence spending too far, was this a mistake in hindsight?”
That was the attack.
O’Connor answered well talking about the Quality of the spend and of course the changing military necessities. More troops doesn’t necessarily mean a better defence force. Also a different time and different advice from Defence than the current government is getting. Also the GFC was an issue back then.
Speers interrupts the answer a lot.
After the interview, which ended at 34.22 mins into the program, Speers went back to the panel and then asked Lanai Scarr a Dixer question about the cost of defence and Labor.
After some initial waffle, she said. “I do want to say something in relation to Labor and their defence spending and touching on what Brendan O’Connor said that they weren’t warned of the risks, in the appropriate way, well the 2009 White paper which was written by Mike Pezzulo, actually had warnings about the strategic environment and set out a major expansion in the ADF and in 2012 Labor cut the defence budget because they wanted to get back into surplus, so I just think that’s an important point to make because they were actually warned about the Strategic environment.”

So I downloaded the 2009 Defence White paper in PDF format and looked at the metadata. It was authored by defence, no mention at all of Mike Pezzulo being the Author. In fact all defence white papers are an amalgam of different inputs from many many sources, which the actual document says.
“1.23 The Community Consultation Panel conducted 30 public meetings and 35 private meetings and received 450 written submissions. These revealed a diversity of opinions about the future direction of Australia's defence policy. The Community Consultation Program found that the Australian community continues to support the concept that the ADF's primary function is to defend Australia and its interests. There is a broad consensus that the present strategic environment is relatively benign in terms of a major military threat to Australia. Given changing geostrategic circumstances, however, caution is also evident. Many in the community expect governments to maintain an effective military posture while ever the possibility of threat of attack, however remote, remains. Most Australians continue to support the alliance with the United States.”
Note: Author’s highlights in red.

The whole paper uses the word Strategic and different ways in which to apply strategy to the size and preparedness of the ADF, but it does not warn of anything particularly, especially with China.
Scarr seems confused as to what a white paper is. This document was written by government as a plan to Develop defence capabilities for the challenges of the future and how to do that with a wider Strategic outlook. It is not as she suggests a paper TO the Government, it is a Paper BY the government.
Having watched the little play act between Scarr and Speers, it was also interesting that Scarr had carefully prepared notes from which to read. But what she read was basically wrong.
I then went to the budget papers since 2006-2007 and tabulated Defence Spending to the date of the latest budget, which was March 2022. I updated this to reflect the new Labor government’s budget in October 2022.
I think the figures below show that the accusation that Labor is poor on defence spending is wrong. The highlighted (in grey) figures show the reduction in actual spending year on year.
Speers and Scarr were right that there was a $2.5 billion reduction in spending in the 2012-13 budget year, but they neglected to mention the larger reductions under the Coalition in the 2015-16 and 2019-20 years.
The most distressing part of the Spend in Defence is in Veterans Affairs, where just before the 2022 Federal Election there was a backlog of 60,000 claims by Veterans.
​
This is well explained by the tabulated figures of the Veterans Affairs spend during those budget years already mentioned.
The conclusion I draw from all of this is that the Journalists concerned don’t have a grip on the facts of Defence Spending and just cherry picked one year in order to attack the Labor party. 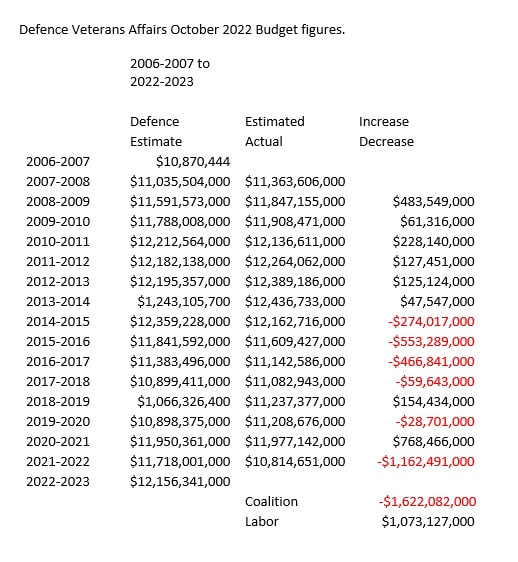 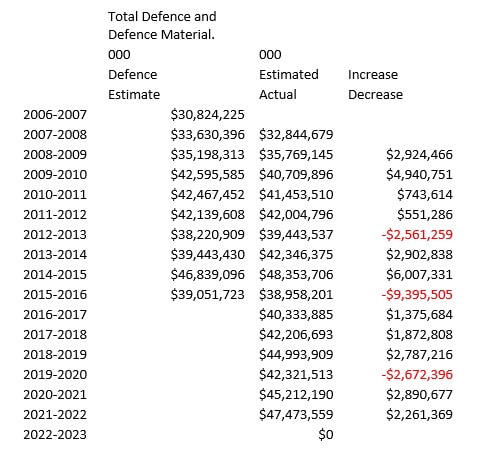 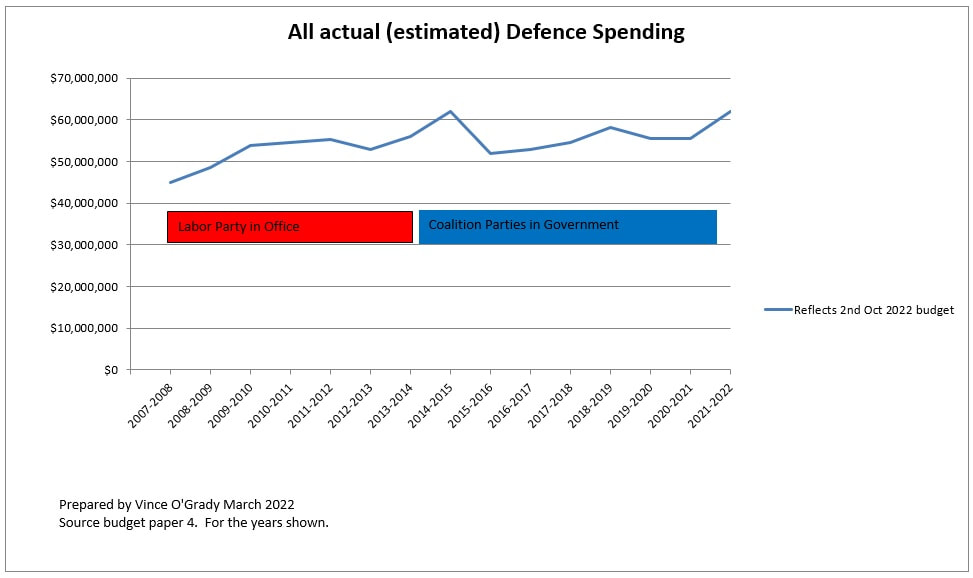