​Leading up to the 2015 budget, there were the normal murmurings about changes to the pension. A decidedly remote prospect, given that Prime Minister Tony Abbott had stated categorically the day before the 2013 September election that “there would be no changes to the Pension”
That video can be seen here.
​As was the case with the changes to pensions modelled above, there were discussion papers put out to gauge the response of the pensioners. Older people tend to be much more compliant and inherently conservative trusting the government of the day and apart from one or two organisation’s and yours truely, the planned changes didn’t seem to be as draconian as they actually turned out to be.
The changes were clever in that they threw about 90,000 people off the pension who were made out to be very wealthy as well as disadvantaging about 300,000 with a reduced part pension.
My modelling actually accords with these figures. With 400,000 thrown under the poverty line because they now had to reply on Interest income from their assets.
At the time of my model, the interest rate was 3% and now 5 years later it is less than 1%, meaning that to achieve a decent standard of living, these retirees would have had to delve into their capital to live above the poverty line.
Another hurdle facing the Aged Pensioner and other on a welfare payment.
The Cashless Debit Card (Indue card).
Short timeline
Introduced in 2015 as a trial until 2017
Extended trail in 2017 to 2020
In 2020 became a substantive program and changes added included the Aged pension as a payment which could be placed on the card in Australia.
Not introduced to them as yet but why add them into a program which was introduced to combat Alcoholism drug use and Problem gambling.
During the term of this conservative government and their attack on the Welfare system, they have introduced management of retirement and other incomes, where between 50% and 90% of a person entitlement is placed on a Debit Card and that card is used to manage their access to their Welfare payment.
The card was introduced in the 2015 budget. This document describes the classes of people who may well be placed on the card.
https://www.aph.gov.au/About_Parliament/Parliamentary_Departments/Parliamentary_Library/pubs/rp/rp1516/Quick_Guides/IncomeManagement
Alarmingly, the Morrison conservative government is addicted to reducing Welfare for the elderly. That is not a statement, it is a fact. They have reduced pensions, Clawed back debt from Centrelink customers which didn’t exist and have pump primed the legislation to introduce the Indue Card to the 3.5 million Aged pension recipients in Australia.

That legislation was changed in December 2020 and became a program rather than a trial.
Worryingly it also added the Aged pension to the list of Welfare payments which can be made the subject of the cashless welfare regime. This can be seen in Part 2 definitions in the Social Security (Administration) Act 1999. As amended by the Act passed by the parliament called:
SOCIAL SECURITY (ADMINISTRATION) AMENDMENT
(CONTINUATION OF CASHLESS WELFARE) BILL 2020 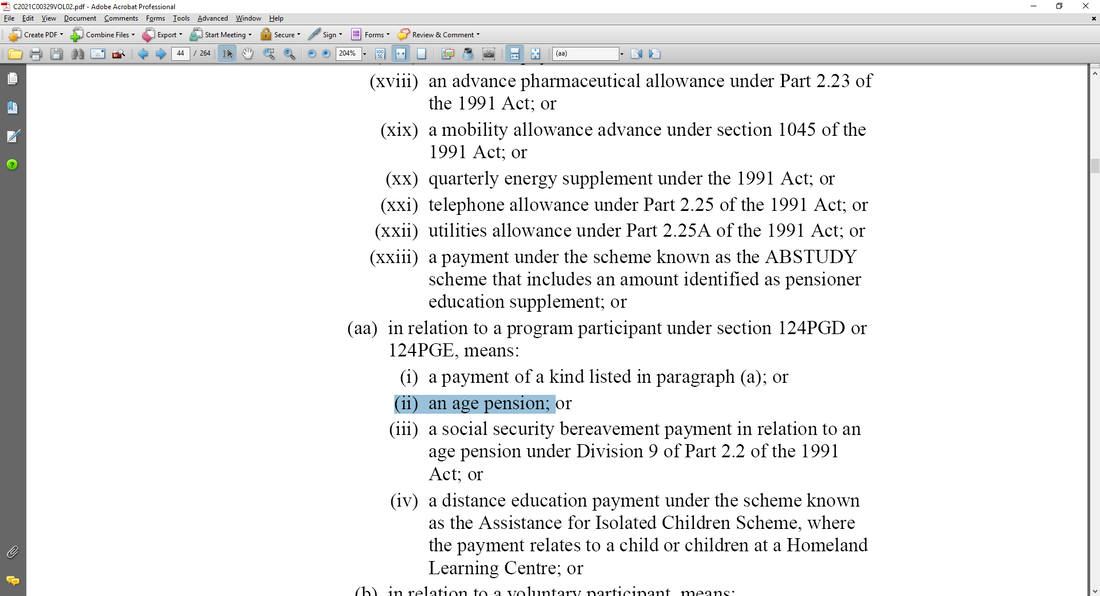 ​The idea was to look at the people in these areas who they though had Gambling, Alcohol or Drug abuse problems.
BUT.... This government didn’t look at the actual individuals who may have had Gambling, Alcohol or Drug Abuse problems, they DECLARED each area as having those problems and applied the trial to everyone who was having a  welfare payment through Centrelink.
Originally the payments defined did not include the Aged pension.
Now they do.
So what does this government have to do to be able to make it lawful for them to put the whole of Australia on the cashless welfare card?
Well that is easy. All they have to do is insert an amendment in the Act to say the Minister can, by regulation or legislative instrument declare parts of or the whole of Australia a place where there are gambling, Alcohol or drug problems and then through an easy change to the Social Security (Administration) Act 1999, place the whole of the Aged pensioners on the cashless welfare card.
Think I am fear mongering?
Listen to the minister and what she said about the changes.
Minister Ruston claims it is a budgeting measure. She also said.
“The Start of a consultation, we have run a number of trial sites, we seeking of course to put all income management onto a universal platform which is the cashless debit card.”... And then I think the conversation needs to be had about what are the advantages of this card.”...”and it’s up to us as a government to sell those advantages and the community will see the value of it.”

ALL income management means the Aged pension as well.
Three million five hundred thousand pensioners on the aged pension who have a problem with gambling, Alcohol and drugs and who can’t budget their money properly?
Give me a break.
The government claiming that nearly 4 million people are addicted to gambling alcohol and drugs and they can’t budget their Pension so should be put on a cashless welfare card?
That 15% of the population are drunks, druggies and pokie fiends is possibly one of the most Bizarre things I have ever heard. But all you have to do is listen to the minister and her aspirations for the Aged population of Australia. To treat them like little children and make their lives a misery.
What a nasty Spiteful vengeful and childish Liberal party policy this is.
What petty vindictiveness this is.
How typical of the right wing chancers and whiners.
How Liberal and National. How Coalition.
Why can’t these people leave us pensioners alone?
How pathetic.
This isn’t a scare campaign, It’s a scared campaign.
Listen to the Prime Minister talking (he’s good at that) to Leigh Sales about this Cashless Welfare card.
When the extension of the (now) program was announced on 10 December 2020 by Ruston in a Media Statement she said this.
“The Cashless Debit Card will continue to support vulnerable people, families and communities following the passage in the Senate of legislation to maintain the program in existing sites.
The Social Security (Administration) Amendment (Continuation of Cashless Welfare) Bill 2020 guarantees the continuation of the Cashless Debit Card for a further two years and also allows Income Management participants on the BasicsCards in the Northern Territory and Cape York to move onto the program.
Minister for Families and Social Services Anne Ruston said this was a positive step towards easing the social harm caused by problem alcohol, gambling and drug use and provides budgeting assistance and support in communities.
“The continuation of the Cashless Debit Card program is in direct response to calls from community leaders who tell us that it is ensuring more money is being spent on essentials and supporting positive changes,” Minister Ruston said.
“There is no doubt in my mind that this program has saved lives and has been a circuit breaker particularly in regions where previous efforts to curb alcohol abuse had not been successful.
“Our commitment to this program is on a permanent basis. But we recognize we have more work to do to in the future to convince the Parliament they should support this program on a permanent basis too.”
​
https://ministers.dss.gov.au/media-releases/660
On 17 March 2021 the message was different.
"Cashless welfare is not about controlling where welfare payments are spent but seeks to limit the amount of taxpayer-funded social security which is used for alcohol and gambling products," Minister Ruston said.

​"We know this program helps limit the ability for problem consumption to cause social harm for individuals, their families and communities."

The Government is working with community leaders in Cape York and the Northern Territory and has committed $17.5 million in funding to bolster transitional support services for participants.
In addition the Bill extended the Cashless Debit Card program to 31 December 2022 and also allowed residents in the Bundaberg and Hervey Bay region to volunteer for the program.”

​In 2017 when the Social Services Legislation Amendment (Cashless Debit Card) Bill 2017 was before the parliament and submissions were being taken about the bill there were many submissions against the introduction of these measures.
For example this part of the bill’s digest is informative.
“Welfare sector Assumptions behind the trials"
The Queensland Council of Social Service (QCOSS) notes that much of the narrative of the cashless debit card trial draws on the idea of welfare dependency and the goal of moving trial participants from welfare to work. Human Services

Minister Alan Tudge has argued:
"the welfare system is creating problems that we never intended. The design and structure of it has meant that for many capable working age people, welfare is no longer a safety net, but a destination."

According to Minister Tudge, some individuals and families become stuck in a ‘welfare cycle’ where their capabilities and motivation erode over time. He argues that, because of the effect of dependency on behavior, increasing income support payments will not make people less impoverished. According to this view, alcohol and drug abuse is both a consequence and a cause of disadvantage. The Minister has expressed frustration that welfare agencies refuse to accept that welfare dependency is real and needs to be tackled.

It is clear that many organizations in the welfare sector do not accept the Minister’s assumptions. For example, in her comments on the budget, Anglicare’s Executive Director Kasy Chambers said: ‘Pushing the line that we need to stop 'welfare dependency' allows the government to disguise inequality as a personal failure rather than a market failure.
The Australian Council of Social Service (ACOSS) has rejected the link between income support and anti-social behaviour and argues that Government needs to address underlying problems such as lack of job opportunities, poor education and severe health problems.

In its submission, "UnitingCare" states:
"It is our view that the card’s logic appears to be based on the assumption that alcohol, drug use and gambling are the primary causes of financial insecurity and poverty in the communities where it is being used. In contrast to this view, we highlight that a number of factors contribute towards the incidence of drug and alcohol use and prevalence in communities, as do factors that lead towards poverty and financial instability. A nuanced understanding of these factors and ways to mitigate them is vital in ensuring positive long-term solutions for individuals and communities.”

Another 37 page submission from the Law Council of Australia. In 2020 for the latest changes to the Act Stated the following problems with the Program.
Conclusion:
164. The Law Council does not support the Bill in its current form. It is concerned that a number of features of the CDC, including as amended by the Bill, undermine human
dignity, a concept which is at the heart of human rights. It also also limits enjoyment of participants’ human rights, including the:

• rights of equality and non-discrimination;

• right to social security (and to an adequate standard of living); and

165. It also undermines the principle of free, prior and informed consent. In the Law Council’s view, there is inadequate justification that the CDC is necessary, reasonable and proportionate in its limitation of these rights. Its concerns regarding the CDC also relate to compulsory income management more broadly in the NT. While it is unable to be definitive on this issue, there is also a possibility that the CDC (including as amended by the Billl) may be inconsistent with key provisions of the RDA.

166. The Law Council is also concerned that the Bill is being progressed in the absence of a full and independent evaluation of its merits, or adequate community consultation as to the CDC as amended by the Bill – including its reframed objects, permanent nature, more limited safeguards and expanded application to largely Indigenous communities. It is also concerned that there has been little regard to, or cost-benefit of, alternative options, including expanding support services which meet individuals’ complex needs. “